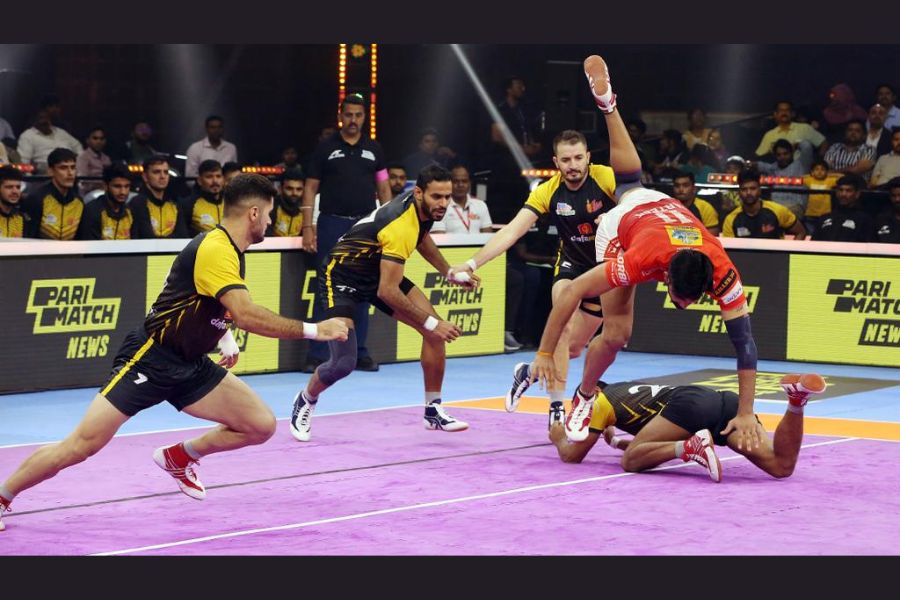 Parteek Dahiya has scored 10 Super 10s in 18 games in Season 9 of the Pro Kabaddi League.

Hyderabad, December 12: A late surge in form during the business end of the Season 9 of the Pro Kabaddi League has helped resurrect the Adani Gujarat Giants’ campaign. A four-match winning streak in the ongoing Hyderabad leg means that the Giants are in with a chance to sneak into the top 6 and book their flights for Mumbai for the playoffs.

One of the driving forces for the Adani Gujarat Giants in recent weeks has been the young raider Parteek Dahiya, who has been raking in the points, having registered 10 Super 10s in the tournament so far. Parteek, who scored 17 points in the Giants’ win against Telugu Titans, is also among the top 10 raiders in the league, with 166 points to his name.

Speaking about his form, Parteek said, “This is all because of the way we train under our coach Ram Mehar Singh. He makes us work very hard during our training sessions, which helps us performance well on the mat. I am quite sure that if injuries had not affected our team the way they did, we’d have secured qualification for the playoffs.”

Since the win against the Puneri Paltan, a team who has already booked their berth for the next round, the Giants have changed extraordinarily from the team that was in action during the Pune leg of the season.

“Our team is in a very good place right now, and we are playing with a lot of gusto, and the combinations are also working very well for us. We need a few results in our favour and a win against the Jaipur Pink Panthers to qualify for the playoffs. Our confidence is high, and the momentum is also on our side.”

Parteek, who has been playing with plenty of panache, admitted that the team has a spring in their step after the recent uptick in fortunes.

“Things weren’t going in our favour, and our plans weren’t working out the way we wanted to when we had a setback with injuries. But now all that has changed, and there is a very different atmosphere in the camp,” he says.

The ace raider from Sonipat in Haryana dreams of donning the Indian jersey in the future and is confident that his performances for the Adani Gujarat Giants team this season can help achieve that. He also noted that the battles on the mat with more established players, overseas and Indian have helped improve his game and given him much-needed experience.

“I have spoken to my uncle (Deepak Niwas Hooda) during the season, and he keeps telling me to concentrate on my game so that I can do well. To ensure I can do well, the biggest learning for me is that I must keep my fitness levels high. That’s one of my biggest takeaways from this year,” the 19-year-old said.

Formed in 2019, Adani Sportsline has an overarching philosophy to inculcate a culture of sports at the grassroots level and create globally competitive opportunities for future champions in India. In line with the group’s vision of nation-building, the company aims to build a world-class ecosystem that nurtures sporting talent, accelerates the sports economy and plays the role of an enabler in India’s journey to become a leading sporting nation.

Next post The stock market investing journey just became easier with Scalping price trading, start your journey towards wealth with everything you need to know

A Galaxy of veteran Footballers to announce Veteran Super League 2023

Celebrations of FIFA stemming from the flame of Commitment and Passion: Dr Mohammed Khan