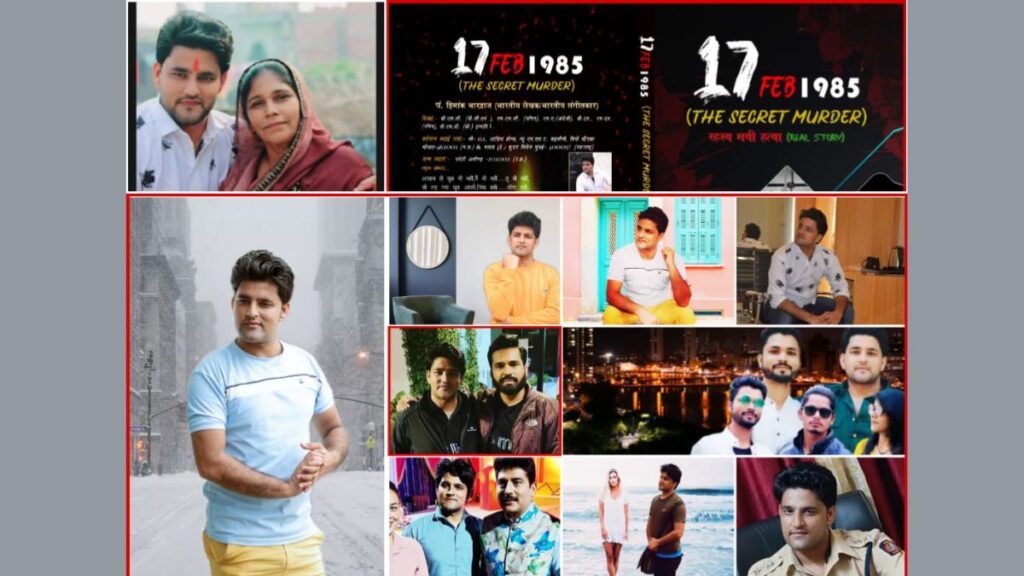 New Delhi, December 19: Himank Bhardwaz, an aspiring writer who dreams to write for Bollywood movies, primarily focuses on bringing justice through his writing to the characters of his stories. Born on November 15th in the district of Aligarh, Uttar Pradesh, with a background of farming from his paternal side, Himank belongs to a family of six with parents Mukesh and Rajkumari Bhardwaj, and siblings Vidit, Abhishek, and Gunjan. Himank has the realization of the struggle one faces to make a name in Bollywood but moreover, he believes that with determination and passion, one can overcome struggles and achieve their aspirations. With this belief, he continues to write with consistent passion and determination. Himank strongly believes that it is necessary to have faith in one’s efforts to value your dreams. That brings to the vision Himank has developed of becoming a successful writer and an aspiring lyricist.

This brings us to Himank’s love for music. He has his own YouTube channel, named #HimankBhardwaz, where is showcases his creativity through music composed by himself. He further promotes his talent through singing and writing Shayaris and motivational speeches.

His journey en route to Bollywood began with the renowned actor Mr. Shailesh Lodha who plays Taarak Mehta in the famous Indian comedy show ‘Taarak Mehta Ka Oolta Chashma’. Being a writer and poet, Himank is highly inspired by Shailesh, who has made a remarkable journey in the field of writing. Bhardwaz claims to be standing by the quote made by Shailesh Lodha that says, ‘Aasan Toh Kuch Bhi Nahi, Main Bhi Nahi, Tu bhi Nahi’, which gives a practical meaning of ‘nothing is easy, neither you nor me’. Himank further expresses his gratitude toward Shailesh Lodha for inspiring him in various ways, right from acting to the art of writing stories and poetries. Shailesh Lodha has been a pillar of support to Himank Bhardwaz as he provided undivided attention and boosted his confidence to become a writer in a city like Mumbai, for which Himank can’t be grateful enough toward Shailesh Lodha as well as apologetic for being occupied with his writing due to which he couldn’t connect with Shailesh Lodha as Himank wished to.

Nurturing the inspiration and support he received from his family and Shailesh Lodha, Himank has firmly believed in writing to enlighten future generations to stand by justice, equality, high morals, and ethic that brings glory to the great nation of India.

Himank began to work on his aspiration to become a writer by writing his very first song ‘Jo Sai Ke Gun Gayega’. The song has already been released by T-Series. Himank’s list of songs gets more meaningful and melodious with his next very own songs, ‘Aao Tumhe’, ‘Juda Hoke’, ‘Maiyya Tere Darshan Ko Badi Door Se Aye Hain. Himank has also been able to leave a successful mark by composing music for a song named ‘Chocobar Chahiye’.

Himank’s main focus is on a book written by himself, which is purely based on a true murder story. Now, this is attention–grabbing story written that Himank is determined to bring justice to. The story revolves around an incident that took place on February 17th, 1985, in the village of Panethi. With the prime character named Mukesh Sharma, the story is based on the untimely death or unexpected murder of Balkishan Bhardwaj, the father of Mukesh Sharma, a well-known and respected writer. His mysterious death or murder has been hidden from the world, which Himank believes needs to be investigated and that justice should prevail in favour of the innocent. With his kind belief, Himank has courageously written down the story and named it ‘17h February, The Secret Mystery’. Being a story based on truths and real incidents, Himanks assures that it has no relevance to any political aspects or conditions and clarifies that story written is precisely based on the facts well researched by the writer himself. To strengthen the credibility, Himank emphasizes the records of researched material in the book. Furthermore, Himank apologizes to those who might find any similarities or any incidents written that might bring unintentional harm to their feelings or opinions.

Himank extends his creativity in his upcoming book named ‘Dastoor (Adhuri Prem Kahani)’ which covers a love story that, as per its name, seems to be entertaining the readers with an emotional story.

Himank courageously believes in writing such heart-touching stories, focusing on their truthful existence with the sole purpose of being a responsible writer who primarily emphasizes the expectation of bringing justice to the deprived and hidden incidents.

Next post IoT platform ThingsUp raised INR 4.8 crore from Udyat Ventures and others to focus on the EV mobility market

With Sanjay Dutt on board, CricAdda is poised for even greater success in the online sports and fantasy gaming industry

Maharashtra Ratna Puruskar Organised by MahaSeWa and Red Ant, Powered by TRIPONN and SAVANI in association with Pravasi Sandesh